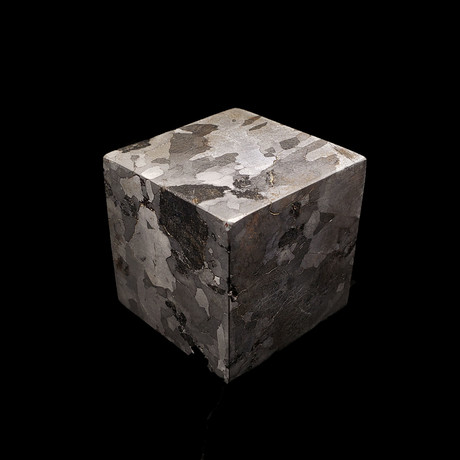 This is one of the largest Campo Del Cielo cubes A.W. Meteorites has ever had. It is a very sought after item due to the rarity of Campo Del Cielo's being cut into cubes— complete with beautiful luster and well-defined sharp edges. There are only a handful of cubes such as these available in the world.

Campo del Cielo iron meteorites are estimated to have fallen to Earth 4,000-6,000 years ago at in Gran Chaco, Gualambia, about 500 miles northwest of Buenos Aires, Argentina. The largest Campo meteorite weighs about 30 tons, and is one of Argentina's national treasures. When sliced, polished, and acid etched, this meteorite shows lines known as the widmanstatten pattern— the tell tale sign of a "metal space rock". Campo meteorites are also well known for their silicate inclusions.

For centuries, specimens were found in the lowland immersed in damp soil. This specimen is one of a recent find at the mountainside away from the original strewn field, known to collectors as a "new Campo". The new location has no standing water, making these meteorites much more stable than the earlier finds. This is a Group IA iron meteorite classed as a coarse octahedrite. On average, the composition is 92.5% iron, 6.68% nickel, and many different trace elements. There are a number of scarce minerals found in it as well, including kamacite, taenite, plessite, triolite, as well as graphite, and silicates.